Reeves was infected with COVID in August 2020. While her symptoms were not bad at the time, complications arose afterwards.

“I had some heart problems, I was getting dizzy a lot and passing out,” she said. “After going to the doctor multiple times, they told me the two biggest things that would help would be to increase how much water I was drinking and to lose weight. That was my biggest motivator, not really how I looked but how I felt.”

She tried to lose weight on her own. Like many, losing weight was her New Year’s Resolution for 2021. While she was able to drop a few pounds, she wasn’t getting the results she had hoped for.

That’s when she decided to ask for help. 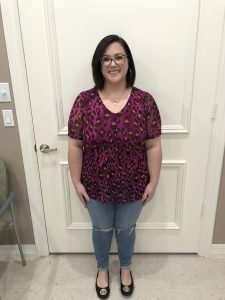 After hearing about NTMC Advanced Surgery and Bariatrics of North Texas in Gainesville, she decided to make an appointment. She says that first consultation was eye-opening and gave her hope that she could lose the weight she needed to lose to feel healthier.

“We just talked about my goals and where I was health-wise,” she said. “We went over what my options were as far as the plan. It was a very detailed appointment. I left knowing exactly what I needed to do. I didn’t feel overwhelmed. I had a packet that I referred back to every single day.”

With the help of the professionals at NTMC, she has dropped more than 90 pounds, which she says has made a huge difference in how she feels on a daily basis.

“When I came in, I was on heart medication and blood pressure medication, but for over six months I have been off all medications,” she said. “My blood pressure is not even elevated anymore and my heart rate is normal. I would be lying if I said that looks didn’t matter and the way you feel about your body, but I just feel more confident and feel better all around. Being able to go outside and play basketball with my son or softball with my daughter. It’s not that I couldn’t before, but I didn’t have the motivation and it was hard with all the extra weight.”

The journey for Reeves continues. She is committed to the plan developed for her by the healthcare professionals at NTMC, and she encourages others to make an appointment as well.

“My biggest recommendation to others is don’t be afraid to ask for help,” she said. “It’s easy to try and do it on your own and get discouraged. That’s the same cycle I was in for 10 years. So ask for help. There are professionals who know what they are talking about. I recommend people to come to NTMC all the time because it keeps you accountable and it gives you the right guidance that you need.”